The first serious study (and first quantitative study) of influence of capital structure of the company on its indicators of activities was the work by Nobel Prize Winners Modigliani and Miller. Their theory has a lot of limitations. One of the most important and seriouse assumptions of the Modigliani – Miller theory is that all financial flows as well as all companies are perpetuity. This limitation was lift out by Brusov–Filatova–Orekhova in 2008 (Filatova et al. 2008), who have created BFO theory – modern theory of capital cost and capital structure for companies of arbitrary age.

Despite the fact that the Modigliani–Miller theory is currently a particular case of the general theory of capital cost and capital structure – Brusov–Filatova–Orekhova (BFO) theory – it is still widely used at the West.

We generalize the Modigliani–Miller theory for the case of advance payments of tax on profit, which is widely used in practice, and show that this leads to some important consequencies, which change seriously all the main statements by Modigliani and Miller. These consequencies are as following: WACC starts to depend on debt cost kd, WACC turns out to be lower than in case of classical Modigliani–Miller theory and thus company capitalization becomes higher than in ordinary Modigliani–Miller theory.We show that dependence of equity cost on leverage level L is still linear, but the tilt angle with respect to L–axis turns out to be smaller: this could lead to modification of the divident policy of the company.

Correct account of a method of tax on profit payments demonstrates that shortcomings of Modigliani – Miller theory are dipper, than everybody suggested: the underestimation of WACC really turns out to be bigger, as well as overestimation of the capitalization of the company. This means that systematic risks arising from the use of modified Modigliani – Miller theory (MMM theory) (which is more correct than "classical' one) in practice are higher than it was suggested by the "classical" version of this theory. 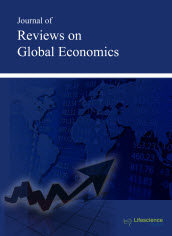 Authors who publish with this journal agree to the following terms:

Authors who publish with this journal agree to the following terms: